Open Mic Night in Otahuhu on a Wednesday?  Now thats that ish i DO like!

First heard about it from MzJ (Julie Taale) who  had written about it on facebook and had also tweeted about it and then Dei Hamo & Tha Feelstyle had gone to check it out and had also raved about it so I was like thats it!  I’m so going to check it out lol!  Sun can I come with you next time you go puhleeeease?!  and so glad I did!  I was in for a real treat!

Headed down there with Dei Hamo about 9.30pmish – it starts at 8 but I had a touch rugby game first so yeah, got down there a bit late but it goes until about midnight so still got to see a whole bunch of awesomely talented singers & musicians.  It’s $2 entry fee & you get free non-alcoholic drinks and snacks plus some amazing live entertainment – too choice!

Basically you can go down to enjoy some great fresh new talent and music in a nice, laid-back environment or if you’re a singer or musician you can put your name down at the door and get in on the performances.  From what I could see, the singers went up and let the band know what they wanted to sing, the band gave them the chord and they were off.  They seemed to be able to play anything  from Kanye Wests’ “All Fall Down” to Rod Stewarts “I don’t wanna talk about it” and even when singers had their own original songs it was no problem for the band. 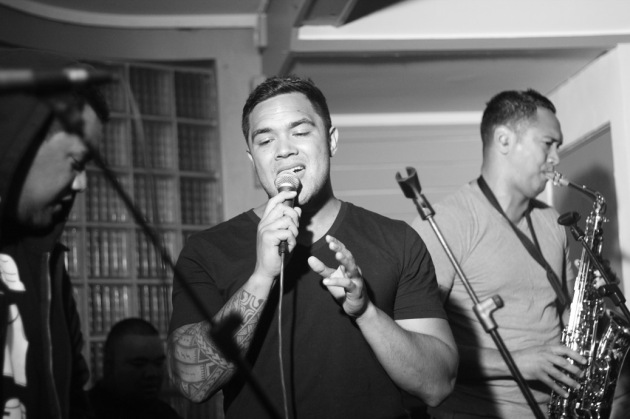 Nick Afoa singing with the band – if you were watching Xmas in the Park this weekend just gone Nick was also performing there.  ps Nick if you’re reading this apologies for getting excited seeing you down Fort Lane on Saturday night/Sunday morning and yelling “HEY YOU’RE THE SINGING GUY FROM THE OPEN MIC NIGHT!!”  lol sorry bout me!

We talked to Charlie for a bit at the end and he said that if you’re a musician and want to jam and play a couple of songs with the band then feel free to get up & jump on whatever instrument you can play too.  If you don’t sing & just rap – ALL GOOD!  They  had a rapper who did his own piece that kind of reminded me of one of those Spoken Word type pieces you see on movies and also  performed Kanyes “All Fall Down” with one of the girls doing the singing bits.

Rapper doing his solo piece.  Sorry I don’t know his name but if I find it out I’ll update this.

They had a young guy named Niko who Charlie had been tutoring at Otahuhu College and he sang a mean rendition of Boys 2 Mens “I’ll make love to you”  he didn’t know all the words so someone had got them up for him on their phone.  LOL moment when he’s in the middle of singing and the lyrics are ‘throw your clothes on the floor – I’m gonna take my clothes off too’ bit of a surprised look on his face and then an ahem and the words sung really fast haha

Niko from Otahuhu College singing “I’ll make love to you”

We also had a real treat because Sammy.J was there and he did a few numbers with some back up singers who were also awesome.  I first got to hear Sammy J at the Mixer3 a couple of months back and wow this boy can SING!   Look out for his new music which I saw on a Niu FM Official tweet will be released TODAY!  So get behind some great NZ talent and support NZ music yo!

Sammy J with back up singers Tree & Saia

Psalms & Age Lepou were there!  They both go to my church (Equippers) so was cool to see them have a jam too.  Psalms sings and Age was playing the bass (below).

And then a bit later we got to what I would have to say was the highlight of the night and that was a 18 year old named Taua.  HO-LY!  You guys would all be familiar with Willie Jones and the song he sung on XFactor USA for his audition?  No?  Click here to check it out.  Anyways, I kid you not – this guy was BETTER than Willie Jones #truestory and if you don’t believe me then come check him out this Wednesday night because Charlie said he’d be there and we requested he do the song again lol!  He’s part of a band named “Home Made Entertainment” so make sure you watch out for these guys in the near future because I’m thinking there’s going to be some awesome things coming from this group.

Taua’s also playing in the Warriors Under 20s team so be sure to look out for him carving up on the league field too lol!

Peep some more pics of the Open Mic night after the drop but lastly I also have to give it up for Charlie Pomee who runs the Open Mic Night and is an awesome host.  He kept the crowd entertained, sang a couple of songs himself – which in itself is an awesome thing (Check out my vid of him below) – encouraged everyone to get up and give it a go and did a great job keeping everything flowing.

First time I saw “Three Houses Down” perform was when they were the band at my cousin Nina’s wedding reception – her husband Ali is good mates with them but yeah, it was back in the days when they were still just playing out of their garage and Orene Ai’i was singing with them too so yeah, it’s really cool to see how far they’ve come and also see them giving back to their community and giving a platform for emerging talent to come out and just have a go!

Got to see them perform at the Mixer3 as well and am looking forward to seeing them again at Raggamuffin 2013 yeeeeeeah Buddy!  and if you haven’t bought any of their music – here’s where you can buy yourself some home grown reggae.  Click here.  and like Mareko said – Support good local music, not because it’s local but because it’s GOOD.  It’s out there!  Yup the Open Mic night definitely proves that!

Shot guys!!   Too cool!  See you Wednesday night!  um I’ll be late but I’ll be there (can you save Taua till we get there?  lol)

Apologies for the shaky videoing & budget editing lol but you kinda get to see the cafe & some of the peeps who were there that night.

Shouts to Dei Hamo for letting me tag along, Charlie and Three Houses Down for an awesome night and all the singers/musos who got up and gave it a go – Meeeeanaaaah!

You all need to get along to check it out so here are the deets:

Where:  Community Cafe, Otahuhu, Auckland, NZ (opposite the police station by the little roundabout which I THINK is on Great South Road)

When:  Wednesday nights at 8pm until late

Why:  Because you should support good local music.  It’s right here! 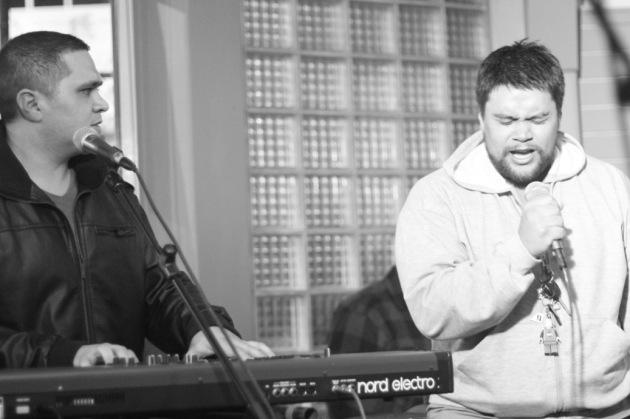 Tree performing her own set

Charlie & Three Houses Down closing the night with some Bob Marley

Open mic nights so popular there’s like a whole bunch of people who stand outside to watch lol!  Get amongst it people!

Sorry – not sure of these guys names but they sang Jodeci’s version of a Stevie Classic “Lately” and they were mean! (or maybe I’m just biased cos I love all Jodeci’s songs lol)